NASA Day at the Smithsonian Folklife Festival 2022: Our Family’s Perspective

I came with my family to help out and also participate in our first face-to-face Smithsonian event since the pandemic and we weren’t disappointed.

A lot of enthusiasm was seen at the hands-on activities prepared for families at the Smithsonian Folklife Festival 2022’s NASA Day on Saturday, July 2, 2022, National Mall, Washington, DC. This year’s theme, “Earth Optimism x Folklife” aligns well with the GLOBE Program and the popularity of its GLOBE Observer app in monitoring Earth’s environment thru citizen science efforts. 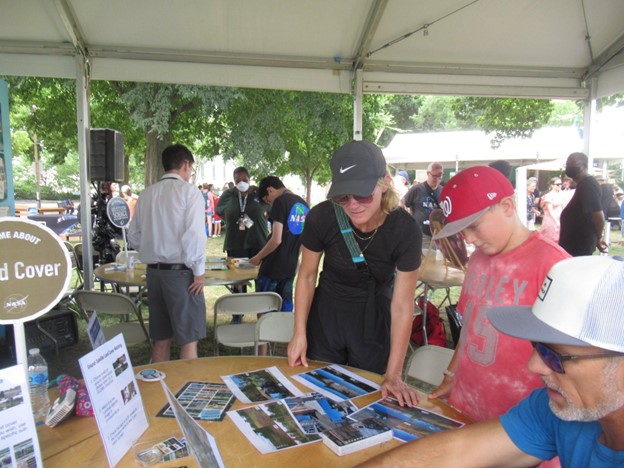 At the 11:00 AM opening hour, the team under the big tent was headed by Dr. Trena Ferrell, NASA/Goddard Space Flight Center’s Earth Science Education and Outreach Lead. Families flocked two tables with several laminated prints of Landsat satellite images and corresponding GLOBE Observer land cover photos from various places around the world in a thought-provoking matching game, and a follow up activity of classifying the terrain from the pictures. A third table had a setup of digital infrared thermometers which visitors could use to gather current temperatures, record them in charts, and get the average temperature in the vicinity.

Close by, under the shade of a huge tree, the group of the Global Precipitation 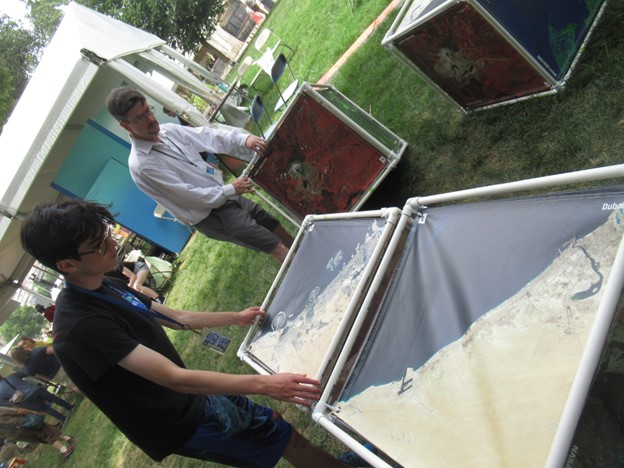 Measurement, led by Senior Outreach Coordinators Dorian Janney and SSAI’s Andrea Portier, presented a 3D rainfall bar chart and a time series of rainfall measurements to engage visitors. Adjacent to them, SSAI Senior Outreach Coordinators Ginger Butcher and Michael Taylor, had a setup of large cubes of Landsat prints of  various cities such as Dubai, and visitors tried to arrange them from the oldest to the most recent based on the changes in the features of the images. These were the favorites of my husband Austin, SSAI’s GMAO Manager and my son, Joseph, a NASA summer intern.

One hour was too short but a time well spent for our family on the Fourth of July weekend. Looking forward to next year!