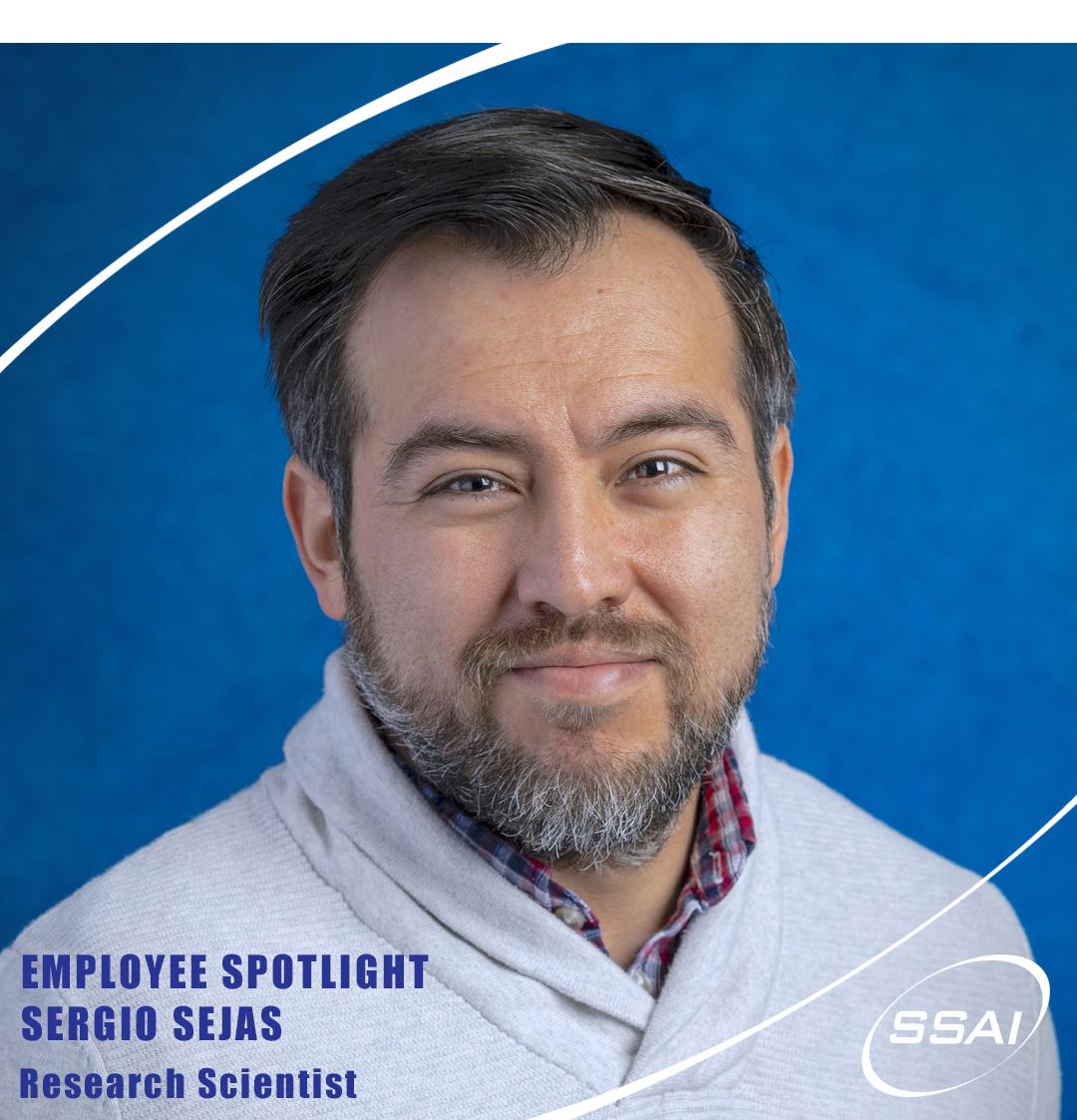 SSAI scientist, Dr. Sergio Sejas, received his Ph.D. in Meteorology in 2014.. Subsequently, he was awarded a NASA Postdoctoral Fellowship, where he spent several years conducting research focused on analyzing Earth’s energy budget to determine how different radiative and non-radiative processes contribute to observations and model projections of surface warming. In 2019, he joined SSAI to support NASA’s CERES project, a mission that provides satellite-based observations of Earth’s radiation budget. As a member of the CERES science team, Dr. Sejas has been instrumental in ensuring that the CERES project objectives are met, which include: 1) producing a long-term climate data record of Earth’s radiation budget; 2) facilitating an improved understanding of Earth’s radiation budget spatiotemporal evolution, as well as the role that clouds, ice-albedo, water vapor, and other atmospheric and surface properties play in that process; and 3) supporting climate model evaluation and improvement through model-observation intercomparisons.

Due to his work on the CERES project and his ongoing research in his area of expertise, SSAI’s Dr. Sejas and his collaborators recognized that despite recent advances in climate modeling, a large uncertainty still exists regarding the degree of warming that is projected to occur by the end of the 21st century—even when considering a presumed, but specified, volume of greenhouse gas emissions. Currently, model projections under a high-emissions scenario indicate that the global-mean surface temperature will likely be between 2.6 and 4° K higher at the end of the 21st century than it was at the end of the 20th century. However, as Dr. Sejas points out, regional warming

can occur on a much larger scale, 3 – 4 times larger in some cases, which inherently brings greater uncertainty. This amplified uncertainty compromises the model’s ability to accurately depict factors that enable scientists to determine the severity of regional impacts on nature and society. Thus, Dr. Sejas and his colleagues designed and conducted a study to identify the physical processes most responsible for the large warming uncertainty, including whether the global-mean warming spread can be explained in terms of the regional warming spread.

Accordingly, Dr. Sejas and his colleagues carried out an extensive analysis of the inter-model warming pattern spread (WPS) related to global warming projections under the RCP8.5 high-emissions scenario. The results enabled them to identify two dominant WPS modes that account for 71.3% of the WPS and 98.7% of the global warming spread (GWS). The two dominant WPS modes are mainly attributed to the ice-albedo feedback spread, which explains uncertainties in polar regions; and the water vapor feedback spread, which explains uncertainties elsewhere. Other processes, including the cloud feedback, contribute less to the WPS. These findings suggest that the WPS and GWS could be significantly reduced by narrowing the ice-albedo and water vapor feedback inter-model spreads.

It’s important to note that previous studies point to the cloud feedback as the main source of uncertainty for the inter-model warming spread. In contrast, Dr. Sejas’s study indicates that cloud feedback spread is of secondary importance, despite its large size, as it tends to be offset by the spread of other processes in a model-dependent manner. This suggests that the large spread in the cloud feedback could result from an inconsistent representation of the coupling between clouds and other processes among climate models. Therefore, Dr. Sejas and his colleagues indicate that going forward, it is important to study the coupling between all the relevant processes in models and observations to further unravel the causes of the inter-model warming spread.

Overall, the findings of his analysis provide a path forward to reducing the uncertainty in model warming projections that will improve scientists’ ability to predict the severity of global warming.

SSAI is proud to announce that Dr. Sejas’s analytical study, titled 'A Less Cloudy Picture of the Inter-model Spread in Future Global Warming Projections' was recently published in the prestigious journal Nature Communications, where it will serve as a reference for the climate science community.