Severe flooding in late July led Kentucky Governor Andy Beshear to declare a state of emergency early on July 28, 2022 and call the flooding in the Appalachian region “one of the worst, most devastating flooding events in Kentucky’s history… What we’re going to see coming out of this is massive property damage. We expect the loss of life. Hundreds will lose their homes,” he said. “This is going to be yet another event that’s going to take not months, but likely years for many families to rebuild and recover from.”

Some of the communities impacted were still recovering from massive flooding in January and February; flooding events have become more frequent and are causing more destruction due to climate change bringing more severe weather. Adding to the problem, Eastern Kentucky is particularly susceptible to flash flooding due to its valleys and steep hills. Additionally, abandoned mines and compacted soil in treeless landscapes due to strip mining reduce the earth’s ability to absorb water and create the potential for landslides during heavy rain events. Meteorologists described this latest flooding event as a once in a 1000-year rain event, but even storms that are classified as one in 50 or 100 years are now becoming more prevalent with the advance of climate change. 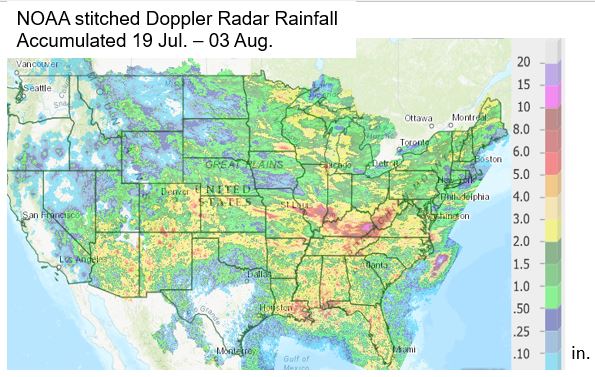 Several catastrophic flooding events have been in the news across the country this summer and SSAI employees at NASA Goddard’s Global Modeling and Assimilation Office (GMAO) are generating near-real time weather visualizations and predictive modeling so that we can better understand the conditions which lead up to and through these extreme weather events. The multiple major flooding events of summer 2022 mostly occurred on spatial scales that fall within the horizontal resolution of the GMAO models, which is a subgrid-scale.

We are provided with glaring warning signs from the models. A common thread across the flooding events is the pouring in of copious amounts of tropical water vapor in enhanced filaments, sometimes referred to as “atmospheric rivers”. The GMAO models are excellent at forecasting these enhanced water vapor transports many days in advance of the flooding event itself. The water vapor transport occurs on large enough scales that can be explicitly resolved by GMAO models. Think of this stage as the step where there is a sponge above you and the sponge has become saturated with water. To wring out that saturated sponge, you still need something to provide the “squeeze”, typically referred to as a meteorological trigger.

The trigger can be a frontal system, a mountain barrier, or an instability trough of low pressure, for example. Each of these triggers typically occurs on horizontal spatial scales that can also be explicitly resolved by GMAO models. With the saturation of the “sponge” and the trigger to unleash the rich precipitable water, the model will show a region of anomalously high precipitation over a short period of time. This will roughly line up with the area and timeframe where the major flooding events occur.

The actual thunderstorm clusters which develop leading to the flash flooding, as noted above, falls within the spatial scales which the models can resolve. Thus, in our current generation of models, the pinpoint time and place cannot be precisely forecast. However, SSAI employees are working on the development of cloud-scale, thunderstorms cluster resolving global models. Some prototype runs of these models have been shown to go that extra final step in detecting and predicting explicit places and times for extreme weather events, such as the multiple floods of summer 2022.

This type of work can help local planners/decision makers in planning to mitigate some of the damages caused by heavy rains, for example by giving them a clearer understanding of how much precipitation fell and where during an event so that it can be connected to how high smaller streams and creeks rose as a result.