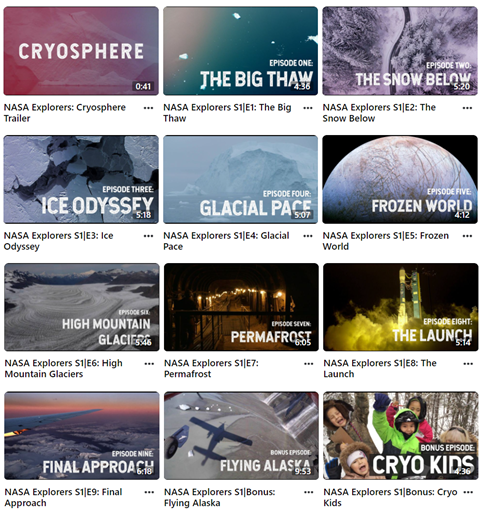 “Webbys” are the leading international award honoring excellence on the Internet and are presented annually by the International Academy of Digital Arts and Sciences - a judging body composed of over two thousand industry experts and technology innovators.

SSAI is proud to announce that our scientists made major contributions to the NASA Explorers series, which was recently honored with a Webby Award!

NASA Explorers is a serialized digital video series produced by Earth Science News Team partners at NASA Goddard Space Flight Center and Jet Propulsion Laboratory. The first season focused on the extraordinary work done by cryospheric scientists at NASA and their university partners as they study our planet’s ice.

The specific award was in the category of Education & Discovery (Series & Campaigns) for social media content advocating education and discovery of science, history, animals/wildlife, and the environment.

The customer’s Earth Science Producer/Manager had this to say about SSAI and their partner scientists:

“Thanks so much for your contributions, both out in the field and back home at Goddard. We’re very pleased that we were able to showcase the amazing science your team does to such a broad audience."

The NASA Explorers Cryosphere Video Series can be viewed at: https://www.facebook.com/watch/NASAExplorersSeries/1624235604349807/